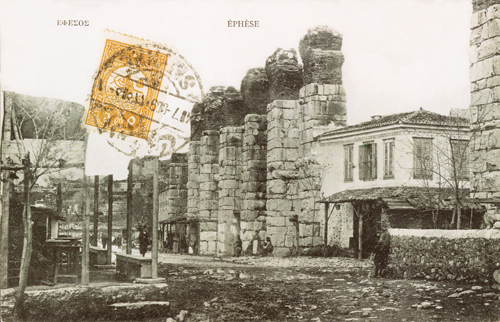 It is a town which may be accessed by land, rail and even air. Selçuk is one of the historical, cultural and touristic capitals of our country. It receives most of the tourists from the cruise ships which berth in the neighbouring ports, i.e. from the sea.
It occupies a distinguished place in the world for the cultural assets it possesses, the ancient town of Ephesus being pre-eminent.
As we have found out in the archaeological research carried out in the recent years, the very first settlements at Selçuk go back some 8.000 years from the present. Çukuriçi and Arvalya mounds represent the Western Anatolia prehistory in our town.
Of these mounds, the excavations recommenced at the Çukuriçi Mound show that this settlement dates back to the Early Calcolithic Age for the time being.

As we approach the present day, we see the continuation of the settlement in our town at the Ayasuluk Hill in the town centre. In the second millennium BC, we encounter a settlement dated to the Late Bronze Age here: Apasa! Established on the Ayasuluk Hill, Apasa was the capital of the Luwian Kingdom. The Luwian Kingdom dominated a great part of Anatolia from the 16th century to the 13th century BC. Also during that period, we encounter a king’s name for the first time. Great King Tarhuntadaru! The Luwian Kingdom reached its largest territories during the reign of Tarhuntadaru. Once the Hittite Kingdom gained ground in the Central Anatolia, the Great Hittite King Murshili II started a campaign against the west and defeated Arzawa in 1315 BC and made it a vassal state.

In the 11th century BC, i.e. Iron Age, migrations started to Anatolia from the North. Prince Androcles, son of Codrus, legendary king of Attica, and legendary founder of Ephesus, also arrived at Ephesus and took over the town from its native Carians, Lelegians and Lydians. In this period, the town centre was still on the Ayasuluk Hill.
The earliest findings date back to the Late Bronze Age in and around the Temple of Artemis, which is situated on the western slope of the Ayasuluk Hill. The area served this faith which is the predecessor of Artemis as from the early Iron Age (late 11th century BC) at the latest.
One sees a revival and a significant increase of population in the area in the 8th century BC. In this period, an example of settlements in the form of a small village has been found under the Commercial Agora that we see today and excavated. Some findings belonging to contemporary settlements have also been unearthed in the area called Coressus to the north of the Panayır Hill.

The initial findings in the vicinity of the Temple of Artemis on the western slopes of the Ayasuluk Hill, which later became one of the seven wonders of the world, are dated back to the 8th century BC. In this period, the people must be living on the slopes of the hill and around the temple.

Herodotus the Historian reports that the Lydian King Croisus conquered Ephesus once he succeeded to the throne in 560 BC and gathered the people who lived in a scattered manner here and urged them to settle around the Artemission. The columns presented to the Temple of Artemis, which was built in the period, by Croisus and the architectural features of the building occupies a special place as a cornerstone in archaeology and architecture.

The Lydian rule lasted short and Ephesus came under the rule of the Achamenid King Cyrus in 546 BC. The Persian rule continued in Ephesus until 334 BC, i.e. until the arrival of Alexander the Great.

Having taken over the control of the area after the death of Alexander the Great, Lysimachus took a step which would have a radical effect on the history and development of the town. He decided to move the town to its present location between the Bülbül (Pion) and Panayır (Coressus) hills. Most important of all, he changed the name of the town and named it after his wife: Arsinoeia! The most important reason for the change of place of the town was that the alluvium and flood brought by the river Caistrus (Küçük Menderes) river and Marnas (Derbent) stream turned the plain and the environs of the archaic town into a swamp. The harbour of the town did not function. The new town was established in the gridiron plan in which the main avenues were intersected at right angles by side streets and which was improved by the Milesian architect Hippodamus between the Bülbül and Panayır hills. It was surrounded all around by walls. Lysimachus caused the theatre, state agora, commercial agora, prytaneion (town hall) and stadium to be built as the major buildings of the town. Thus, he aimed at convincing the people to move from the vicinity of the temple of Artemis to the new town. Further, the State model which had been established by small towns by this period which was called the Hellenistic Period had left its place to the States which scattered over large areas. Of course, the name of Arsinoeia did not survive longer than Lysimachus.