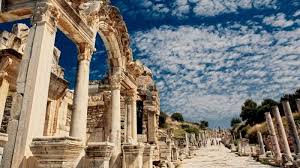 The second largest ancient city of the world. Explore the well-preserved ruins of Ephesus, the ancient capital of Roman Asia. The extensive ruins include the spectacular theatre, library and terraced houses. Ephesus was the major city of Asia Minor during the New Testament era. It was a major port – now silted up – located at the end of the spice and silk roads that ran west from Arabia and Asia. Paul visited the city on his second and third missionary journeys – staying there for about 3 years on his third journey. Ephesus is one of the seven churches mentioned in the book of Revelation (1:11; 2:1–7). It is mentioned 18 times in the New Testament. It was the center for the worship of Artemis (Roman Diana). The Austrians have been excavating there for over 100 years! Most of these artifacts are housed in the Ephesus Museum in Selcuk and it provides more information about the history of the area with many quality treasures on display.

According to the old legends, Ephesus was founded by the female warriors known as the Amazons. The name of the city is thought to have been derived from APASAS, the name of a city in the KINGDOM OF ARZAWA meaning the city of the Mother Goddess. Ephesus was inhabited from the end of the Bronze Age onwards, but changed its location several times in the course of its long history in accordance with habits and requirements.